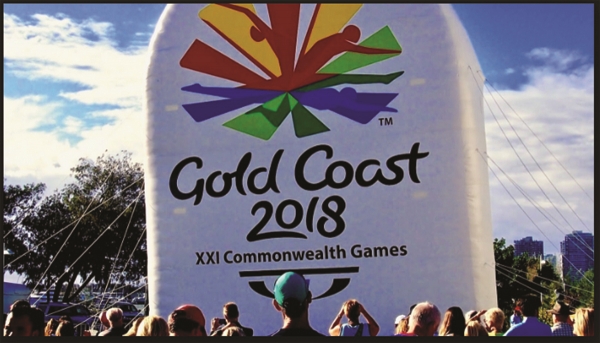 Four years after the last Commonwealth Games were held in Glasgow, the crème de la crème of some of the best sportsmen and women in the world are poised to compete for much-coveted honours in the 21st edition in Australia’s Gold Coast.

Scheduled to be held from April 4-15, the so-called Friendly Games is expected to comprise 70 Commonwealth countries, from the tiny St Kitts and Nevis in the Caribbean to one of the planet’s most populous nations, India.

Athletes will scramble for medals in 275 events in a total of 18 sports, which will include squash and wrestling among the main attractions of athletics, swimming  and gymnastics.

Pundits expect perennial heavyweights of the games - Australia, England, and Canada – to continue with their dominance in the rush for gold, but not without some stiff challenge from the likes of Scotland, New Zealand, India, Kenya and Nigeria, which in recent years has always finished among the top 10 in the overall medals table.

Unlike with the much larger Olympic Games, African nations often get a better chance to shine in the Commonwealth Games and this tournament will be no exception, with Kenya, Nigeria and South Africa being the continent’s brightest prospects, the latter being Africa’s best placed nation in  2010 and 2014, in Delhi and Glasgow respectively. Its hopes lie in aquatics, which yielded 12 of its 40 medals in Glasgow, shooting, rugby, cycling, and para-sports. In the nine editions South Africa has competed in, it has achieved an impressive medal tally of 117 gold, 112 silver and 123 bronze.

After recording what went on to be its second best outing at the Commonwealth Games with a 36-medal haul in Glasgow, many are wondering whether Nigeria can improve on that result not withstanding the usual concerns about poor organisation in the run up to the tournament.

Segun Toriola, Nigeria’s most experienced table tennis player and gold medalist at the 2006 Commonwealth Games in Manchester, said in a recent interview: “I don’t know why things cannot change in Nigeria, because the Commonwealth Games in Australia is very close and some of us outside the country have no inkling of what is going on. We will try our best but if we consider the way we have been treated, we will not do well.”

However, Habu Gumel, president of the Nigeria Olympic Committee (NOC), told NewsAfrica that, much as a lot still needed to be done, Nigeria was set for yet another glorious outing. “The NOC, in collaboration with the Commonwealth Games Federation, secured training scholarships for 10 athletes to support their preparations for Gold Coast 2018,” he revealed.

Ninety athletes will represent Nigeria in eight sports. Not surprisingly, athletics has the largest contingent with a  line-up of 37 –  17 men and 20 women.

Blessing Okagbare-Ighoteguonor, one of the stars of Glasgow 2014, will lead the Nigerian athletics team to Queensland city as she attempts to defend her 100m and 200m titles. Okagbare will be joined by sprint hurdler Oluwatobiloba Amusan, former high jump champion Doreen Amata, national record-holder in the women’s 20km walk,  Fadekemi Olude, and veteran 400m runner Patience Okon-George. Emmanuel Bamidele, who won the 400m at Commonwealth Games trials, headlines the men’s team that also include sprinters Egwero Ogho-Oghene and Samson Nathaniel, and shotputter Mozia Stephen.

Sunday Adeleye, technical director of the Athletics Federation of Nigeria, was in an upbeat mood when he spoke to NewsAfrica. “Nigeria won’t be in Australia just to add to the numbers and we are sure we can compete favourably for medals,” he said.

Expectations are also high in sports such as table tennis, wrestling, and para-sports, where Nigeria hopes to make a strong showing.

Whilst South Africa and Nigeria can boast a full complement of their best athletes, this is not the case for Kenya. The East African nation,  at the time of filing this report, was facing the dilemma of entering a ‘B’ team for Gold Coast after its elite runners did not bother to turn up for accreditation trials. They include David Rudisha, the Rio Olympic Games 800m champion, Paul Tanui, the Olympic 10,000m silver medalist, Stacy Ndiwa, the National Cross Country champion, and Mary Moraa, the World U18 400m silver medalist, who have reportedly chosen to focus on the lucrative Diamond League meetings, which start in Doha in May.

Despite their absence, Kenya still hopes to perform convincingly and to top the athletics medal table just as they did in 2014 when they won 10 gold, 10 silver, and five bronze. Its most lucrative event, in terms of medals, is the 3,000m steeple chase, which since 1994 a Kenyan has always won.

Stars to watch out for

The men’s 100m race is regarded as the blue riband event of all top notch sporting competitions and in recent years it has been dominated by Jamaica’s superstar sprinter Usain Bolt. Now that he has retired, pundits believe that it will be Andre De Grasse, the Canadian who performed superbly at the 2016 Olympic Games, recording personal bests in both the 100m  and 200m, who has the best chance of being the new star of the showpiece event.

However, Jamaica’s dominance on the track looks set to continue if Elaine Thompson has anything to say about it. Thompson, 25, became the first woman since Florence Griffith Joyner, the controversial US sprinter at Seoul 1988, to win both the 100m and 200m at Rio 2016. She’ll be looking to do the same in Gold Coast.

After winning gold in the 5,000m at the 2010 Commonwealth Games, the 2015 World Athletics Championship and the 2016 Olympics, Kenya’s Vivian Cheruiyot is due make her final bow at the Gold Coast Games and will want to go out with a bang.

In badminton, Lee Chong Wei has won the silver medal at each of the last three Olympic Games and was ranked world No.1 for 199 consecutive weeks. Having won the All England Open and the Hong Kong Open in 2017, and reached the final of several other events, the Malaysian shows no sign of letting up and believes he can win gold in Australia.

One man who will be looking to entertain home fans in the swimming arena is Kyle Chalmers. The young Australian freestyle swimmer claimed gold in the 100m at the 2016 Olympic Games in spectacular fashion and will be aiming to add a Commonwealth gold to his collection.

Among other stars to look out for are England’s Adam Peaty, the swimmer who already has an Olympic gold medal and five World Athletic Championship crowns to his name; Valerie Adams of New Zealand, who is heading to her fifth straight Commonwealth Games, eyeing her fourth gold medal on the trot; and Caster Semenya, South Africa’s all-conquering middle-distance runner, who already has two Olympic gold medals in the 800m but will be in Gold Coast looking for her first Commonwealth Games medals.