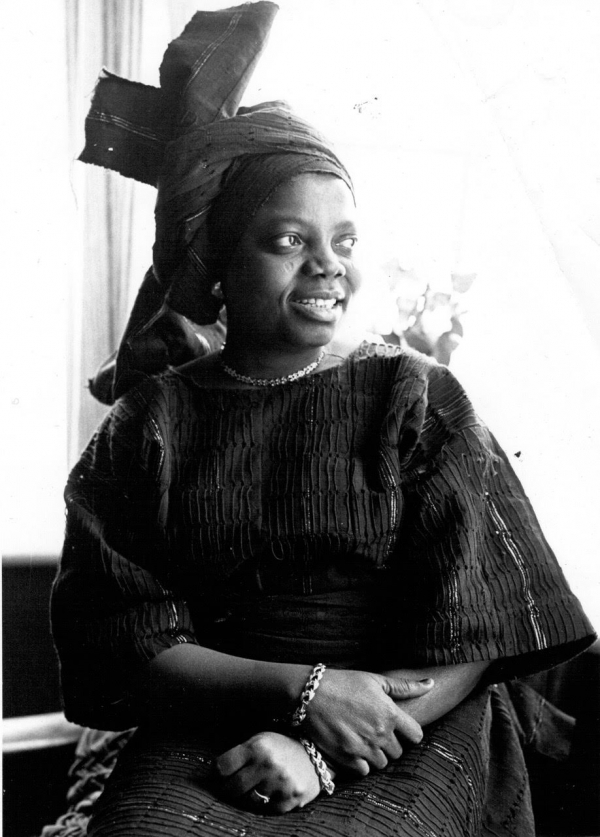 A special event in London celebrates the life and works of Buchi Emecheta, the late Nigerian female novelist

A young woman leaves her home in West Africa to live abroad filled with dreams of becoming a writer, but her abusive husband burns her first manuscript. With several children in tow, she walks out of the marriage and ends up in a slum. She continues to put pen to paper, though, and becomes a famous novelist.

This is no fairy tale but the amazing rags to riches story of Buchi Emecheta, who died last year aged 72. A prolific writer, she penned some 15 novels, a number of children’s books and dramas and is considered a pioneer in African writing for the way she gave women and girls a voice.

Her extraordinary life was celebrated at a recent event in London, which included the re-launch of six of her novels by Omenala Press, the publishing arm of the Buchi Emecheta Foundation.

They include her debut work, the semi-autobiographical In The Ditch, which came out in 1972 and was based on a column she wrote for the New Statesman about the experiences of a young Nigerian woman struggling to bring up her five children alone in London.

No longer able to work as a librarian now that she has left her husband, she is forced to join the ranks of “problem families” and depend on benefits while still jostling for bargains in the market. Although she is routinely subjected to racist slights, Adah finds common cause with her neighbours in the face of a greater enemy – poverty and society’s determination to keep women in their place.

Told with self-deprecating humour, In the Ditch colourfully captures a now long ago world of “the dole”, “char ladies”, neighbourhood factories, and homes filled with the unmistakable whiff of damp mixed with paraffin heaters in a post-war Britain grappling uncertainly with change.

“I remember those days with a strange kind of nostalgia,” recalls Sylvester Onwordi, the second of Emecheta’s five children. “We were certainly poor but for us it was normal. But as my mother became successful we experienced a series of social elevations and ended up living in [upmarket] Muswell Hill.”

It was her second Adah novel, Second Class Citizen, that would identify Emecheta as an important literary figure. It was followed in 1976 by The Bride Price, whose original manuscript  five years earlier she had shown to appreciative colleagues at Chalk Farm Library before it was thrown unceremoniously into the fire.

In 1983, with several more titles under her belt, she joined Ian McEwan, Martin Amis and Salman Rushdie on Granta’s list of 20 best young British novelists.

Her stories were either located in the diaspora or Africa but bound together by the female protagonist’s efforts to lay claim to her independence. The most talked about is the ironically titled The Joys of Motherhood. Set in early colonial Nigeria, it is on the schools curriculum of New York State in the US and has just been published in hardback in Brazil under a title that translates as ‘a man is never ugly’. She also lectured at a number of US universities and was visiting professor of English at the University of Calabar in Nigeria in the 1980s.

“My mother resonated with so many people because of the example she set in the way that she overcame hardship,” continues Sylvester. “She had an impoverished childhood and her early years in the UK were difficult but she still possessed that spark of determination and courage to turn her dreams into reality. In that sense, she is an inspiration to women everywhere.”

It was Sylvester who helped organise the day-long Celebrating Buchi Emecheta event at SOAS, London University, on February 3, which saw contributions from Margaret Busby of Allison&Busby, her first publisher, shadow home secretary Diane Abbott and James Currey of the Heinemann’s African Writers Series, as well as a cultural display by women from Ibuza, the author’s home town in south eastern Nigerian.

“When my mother died I immediately thought we should not let her legacy die with her,” explains Sylvester. “After experiencing such huge success her profile had begun to wane in her later years and people kept telling me they found it difficult to get hold of her books. So republishing them is one way of maintaining that legacy in a tangible way.”

Although Emecheta’s chronic ill health brought on by a stroke did not help matters, Sylvester believes that publishers no longer know how to market what they have come to regard as niche writing. As a result, many of her novels are now out of print. Tellingly, libraries in her original heartland of Camden stock little more than a handful of her titles between them, while her former workplace of Chalk Farm Library, has none.

“It is very sad,” says Sylvester. “But judging by the success of our event we know there is a huge demand for her work out there.”  The foundation plans to republish six more titles later in the year while there has been interest from publishers internationally for translations of her work, including in China and South Korea.

“At the end of the day, my mother was this country’s first successful black female novelist,” asserts Sylvester. “Her books were innovative yet she did not think of herself in any way as a pioneer when she began writing. She was a story teller and all she wanted to do is write.”