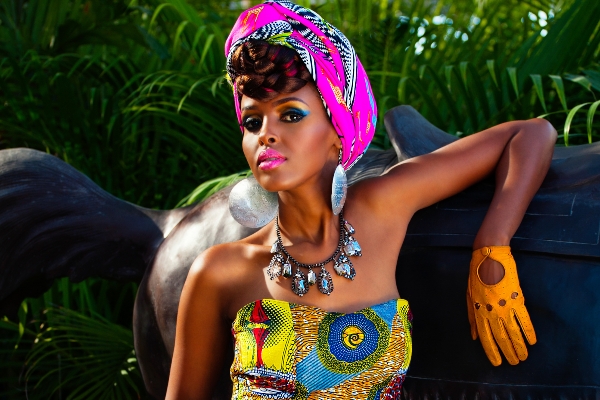 Ethiopian designer Feiruza Mudessir talks to Judy Cogan about her streetwear stylings, and how she’s creating an Ethiopian-inspired oasis amid the bling and skyscrapers of the UAE.

It was a big step for the Ethiopian, whose edgy men and women’s fashion label, Finchitua, fuses hip streetwear designs with traditional Habesha fabrics.

Her range of vibrant sarongs, tulle skirts and bleached embroidered denim jackets are infused with references to her East African heritage.

‘I’m a proud Ethiopian,’ said the designer. ‘My label stays true to my roots.’

Indeed, everything in Mudessir’s boutique, which is situated on Dubai’s iconic Jumeirah Beach, tells a story of the designer’s history.

There’s a silk scarf inspired by Ethiopia’s Aksum Empire and a bag printed with its ancient Ge’ez script.

While other items, such as her colourful Mirchi Masala skirt – named after a mix of ground spices in Hindi — are a nod to her teenage years modelling in India.

But it’s Mudessir’s African heritage that really inspires the designer, who founded her fashion label a few years after moving to Dubai in 2003.

She is currently in the process of collecting Ethiopian literature to create a reading area within her store to teach her customers about the heritage and culture of her birthplace.

‘I want my customers to relax and feel like they’re walking into an Ethiopian home,’ said the businesswomen.

‘I love telling my customers facts about Ethiopia, its diversity and rich history. They are buying into that story, after all.’

Before setting up her label, it was important to Mudessir that she took the time to properly research Ethiopian history and its culture, starting from the Aksum Empire.

‘I knew the basic history, but if I want to inject that into my designs, the only way to do that was to go back to the beginning. Digging deeper has been fun and feels like a real privilege.’

The traditional Habesha fabric Mudessir uses in her collections originates from the Dorzee tribe in southern Ethiopia and is now her trademark.

However, sourcing the material proved a big problem for the designer.

‘I noticed the shemanes [traditional Habesha weavers] would only supply their hand-woven fabrics to big retailers,’ explained Mudessir.

Luckily, her sister and her family still live in Addis Ababa, and, with their help, she was able to cut out the middlemen and set up her own team of local weavers.

‘By going directly to the source, I could put more money into the women’s pockets,’ said Mudessir.

‘I also pay them in advance, which helps them immensely because the retailers pay them in arrears. It’s hugely fulfilling seeing the positive impact we have on these families.’

She added: ‘We’ve been working with the women for four years now and we’ve even redesigned the Habesha pattern to make it unique to Finchitua.

‘My number one goal is to tell my story through my designs and always remain true to my roots, while at the same time giving these women a sustainable income and a higher quality of life.’

Finchitua’s popularity is growing year on year with orders coming in from all over the world.

Mudessir has also introduced Arabic calligraphy into her designs as well as modest streetwear and denim abayas (the traditional cloak worn by Arab women).

‘My collections have grown with the diversity of my customer base,’ said Mudessir.

Her journey into the fashion designer she is today hasn’t been smooth sailing.

She signed up to a ‘crash course’ in design in Dubai and ignored advice from her tutors to accept a role in a well-known fashion house upon graduating.

‘I was determined that the first clothes I made would have my own name on the label, which looking back was pretty naïve,’ she admitted.

Then came an idea to upscale an old denim jacket.

‘I had a vision of creating this denim jacket by incorporating all three of my worlds: Ethiopia, India and the UAE. That’s how my first AfroRetro collection was born.’

‘I had very little knowledge of the business side of fashion back then and zero industry contacts,’ she explained.

‘I chose the hard way, but I have learned a lot through my experiences and I’ve loved this whole process of self-discovery.’

Fashion, though, is a notoriously difficult industry to crack, as Mudessir found out while working with a ‘huge’ global denim brand.

‘I was approached to create fresh designs with the brand that would culminate in a professional photoshoot and a behind-the-scenes documentary,’ said Mudessir.

‘It was a dream come true! I put my heart and soul into the project and worked day and night for two months straight.’

‘They decided to collaborate with a bigger named artist on the project instead.

‘It crushed me. I felt so let down. The pain of disappointment was real. But I did find my own silver lining.’

Determined not to be kept down, she added the designs to her collection and made a killing.

‘Those pieces have since become my best sellers. I wouldn’t have come up with the concepts if it wasn’t for that particular opportunity, so surprisingly enough, all the pain was all worth it.’

Mudessir’s happy-go-lucky attitude is very much part of the brand’s DNA. It’s even in the name: Finchitua means ‘the girl with a gap between her teeth’, a reference to her gappy smile.

Like the rest of the world, 2020 has brought little to smile about for the Dubai-based designer.

When the Covid-19 pandemic gripped the world earlier this year, the five-star hotel where her store is based was forced to close. It only reopened again in October.

‘I’ve had a lot of time to be creative,’ mused Mudessir on the lockdown.

‘I used the time to finish working on a new capsule collection that focuses on the African fabric Kente. I’ve never worked with this fabric before so it’s a new look for Finchitua.

‘When it is safe to do so I plan to do a big brand campaign in Ethiopia,’ added the patriotic businesswoman.

‘Ethiopians are proud to see their culture spread to other parts of the world, but I get a lot of encouragement to take the Finchitua brand back to Addis Ababa – to celebrate our diversity, warmth and heritage.

‘I feel it’s my duty to share the beautiful stories of Ethiopia past and present.’