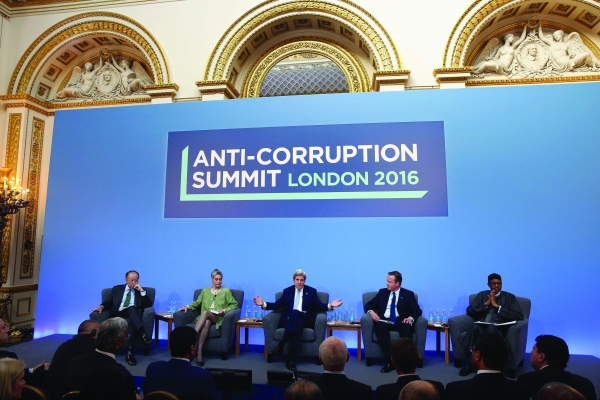 As a number of top government officials remain in their jobs despite corruption allegations against them, people are questioning Buhari’s commitment to fighting graft

When President Buhari made his inauguration speech in May 2015, he pledged to tackle corruption, which he said was a “hydra headed monster” that was crippling Nigeria. With Buhari expected to declare his intention of contesting the presidency again in 2019, people will be weighing up whether he has made good on his promises.

In 2015 Nigerians were prepared to give him the benefit of the doubt largely because of his previous record in government, first as a no-nonsense military leader during the 1980s, secondly as the head of the Petroleum Trust Fund a decade later, which was praised for its transparency. People were also impressed by his famously unostentatious lifestyle.

Three years down the line, it is an entirely different story. According to the latest report of global anti-corruption watchdog, Transparency International (TI),  Nigeria comes in at number 148 out of 180 countries evaluated in its corruption perceptions index, lower than its 136 ranking in 2014.

“Even more alarming, further analysis of the index results indicates that the countries with the lowest protection for press and non governmental organisations also tend to have the worst rate of corruption,” TI commented.

Its Africa director, Chantal Uwimana,  added: “The people of Nigeria are suffering from an economic downturn. They need to know that the government is using all of its resources to benefit public service. This requires a serious crackdown on corruption as well as transparency when it comes to how recovered stolen assets are used.”

Uwimana was referring to repeated allegations of government officials looting recovered funds with apparent impunity and a series of embarrassing scandals that casts doubts on the government’s anti-corruption crusade. One of the biggest  blew up after  Kano state lawmaker and chair of the house committee on appropriations, Abdulmumin Jibrin, disclosed that the 2016 budget had been “padded” to the tune of N40bn ($110m). He claimed the speaker of the house, Yakubu Dogara, had been the brains behind the scam.  However, the matter was swept under the carpet and only person to lose his job was the whistleblower, Jibrin.

Another scandal involved  David Babachir Lawal, chair of the Presidential Initiative for the North East, a body set up to cater for the displaced people in the northeast of the country as a result of Boko Haram attacks. Lawal, a member of Buhari’s inner caucus, was accused by the senate of diverting funds to the tune of N200m ($551,000) by awarding reconstruction contracts to companies in which he had a personal interest. President Buhari set up a three-man committee headed by Vice-President Yemi Osinbajo to probe Lawal alongside the  director general of the Nigeria Intelligence Agency, Ayo Oke, who had been indicted over a $43m cash haul discovered in a luxury apartment in Ikoyi Lagos.

Osinbajo submitted a report into both claims in August 2017 but it was not until October that Buhari sacked Lawal and Oke. They had been suspended since April of that year .“The fact that both men have not been prosecuted in line with the law of the land up till now leaves much to be desired and also casts a dull shadow on the anti-corruption fight of the president,” said Simon Omaga, an Abuja-based lawyer.

Nigeria’s state-owned oil giant, the Nigeria National Petroleum Corporation (NNPC), has long been associated with sleaze and continues to be so under Buhari. In December 2017, following the reappearance of long fuel queues all over the country, Nigerians were shocked to learn that the president had authorised it to subsidise petrol by N26 a litre without seeking National Assembly approval. NNPC chief and Buhari insider Maikanti Baru later explained that the subsidy was due to increased “landing costs” for importers.

“What is worrisome is the fact that the same government had less than three years ago raised the cost of per litre of petrol from N85 to N145, an increase of 66 percent with a promise that subsidy regimes were over since government could no longer sustain them,” said  Isah Aremu of the Nigeria Labour Congress. “Up till the present time, the government has not explained in concrete terms where it sourced money to pay for the subsidy.”

Kogi West senator Dino Melaye was more to the point: “The NNPC is a cesspit of rot in Nigeria whenever corruption is mentioned. Top officials of the corporation enjoy the largesse in conjunction with oil marketers when a subsidy regime is in place.”

Shortly before this development, a leaked memo to the president from the minister of state for petroleum, Ibe Kachikwu, revealed serious irregularities at the NNPC. According to the letter, published in the local media last October but written in August, five NNPC contracts with a total value of $25bn “were never reviewed by or discussed with the board”.

Kachikwu added: “There are many more, your excellency.” He pointed the finger of blame at Baru. However, the core allegations were never investigated. Instead, Buhari invited Baru and Kachikwu to the Presidential Villa and urged them to find ways of working more effectively together.

Many people are also scratching their heads over the case of Yusuf Usman, who was suspended from his job as head of the National Health Insurance Scheme in July 2017 after being accused of stealing public money amounting to N919m ($2.534m). Although he is still under investigation by the country’s anti-graft agency, the  Economic and Financial Crimes Commission (EFCC), Buhari unilaterally reinstated him in February.

Segun Awolowo also remains in his position as executive director of the Nigeria Export Promotion Council (NEPC) despite accusations in 2016 that he diverted N60m ($165,442) from it and ran an illegal fund allocation system. Incredibly, Awolowo, grandson of revered nationalist Obafemi Awolowo and a relative through marriage of the vice-president, was not investigated and reappointed  for a second tenure. A civil society organisation calling itself the Coalition of Patriots against Agents of Corruption, described him as a Lagos socialite “fond of ceaseless overseas travel to the detriment of his executive duties, by which he wastes public funds meant for the NEPC.”

Umar Danladi, chair of the Code of Conduct Tribunal, did come under the scrutiny of the EFCC following allegations in 2016 that he received a N10m ($27,573) bribe but was twice cleared for insufficient evidence. However, due to external pressure, the EFCC arraigned him again in mid-March.

Buhari’s reinstatement of Rasheed Maina, the former chair of the Police Pension Scheme, into the civil service last year despite multiple accusations of corruption against him going back years has brought the anti-corruption stance of the government into further ridicule.  In another astonishing turn around, it has also decided to prosecute Senator Isah Misau from Bauchi State following his allegations last year that Ibrahim Idris, the Inspector General of Police, was corruptly enriching himself.while Idris on the other hand, remains in his position.

The opposition People’s Democratic Party (PDP) insists that the only people to feel the heat from the anti-graft crusade are its own members. According to the PDP’s spokesperson, Kola Ologbodiyan: “The truth lies bare that the Buhari’s administration is not engaging in any fight against corruption but in a political witch-hunt of the opposition, while his government reeks with corruption.”

Reacting to the African Union’s recognition of President Buhari as the champion of anti corruption on the continent, the party said in a statement: “As we speak, those receiving accolades as champions of corruption have not cleared the air on the leaked memo detailing underhand oil contracts to the tune of $25bn at the NNPC and ministry of petroleum resources, which are under President Buhari’s direct supervision. They are yet to offer any explanation on a series of reported frauds in the oil sector including allegation of the use of 18 unregistered companies to lift and divert N1.1 trillion worth of crude oil in the last one year just to service the APC’s [the ruling party’s]  interests.”

But Habba Sadiq of the department of political science at the University of Abuja thinks differently. “Since 1999 to date, no administration has tackled corruption the way the present government has done in the last three years,” he said.  “So much money that was looted has been recovered through prosecution and plea bargain. It is no longer business as usual in many government offices as it used to be.”

His view is supported  by Osita Okechukwu, the director general of the Voice of Nigeria. He said: “One thing is clear, this government has shown genuine commitment to fighting corruption than any other government.”

Although the TI acknowledges that the government has attempted to raise the game in fighting graft, it believes much more needs to be done. It said in a statement: “The anti-corruption agencies in Nigeria need to speed up the process of investigation so that the suspects can be formally charged  and their identities made public; thereafter, the judicial process should be expedited so that the funds can be released and made available for public spending.”