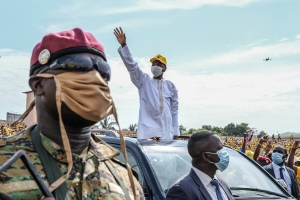 One leader may have been voted out in Africa’s October elections. But elsewhere the status quo remains, as accusations of voter intimidation and violence overshadow the polls.

His election marks a seismic change for the group of 115 small islands in the Indian Ocean, where one party has dominated the presidency since 1977.

However, while the opposition’s win may represent a big step in the Seychelles’ maturing democracy, the country will have little time to rest on its laurels.

Covid-19 has reduced tourist arrivals in the archipelago to a trickle, and the economy has already shrunk by around 14 per cent.

The Seychelles is heavily reliant on tourism, which accounts for two-thirds of its GDP and employs thousands of citizens in well-paying jobs.

The new government has also inherited a growing narcotics problem that threatens to overwhelm the country’s health system.

An estimated 10 per cent of the Seychelles’ working population are addicted to heroin, according to the Agency for the Prevention of Drug Abuse and Rehabilitation (APDAR).

If Seychelles’ elections marked a maturing of African democracy, it was business as usual in Africa’s other three October polls.

The October 18 poll in Guinea has been overshadowed by violence, after 82-year-old President Alpha Condé won a controversial third term in office with 59.5 per cent of the vote.

Since the vote, at least 30 people have died and a fleet of police trucks surrounded the house of opposition leader Diallo, who was trapped inside for over a week.

Guinea’s incumbent leader claims that a constitutional referendum in March allowed him to run, despite a two-term limit, but opponents say he is breaking the law by holding on to power.

Dozens had been killed in the months after Mr Condé said he would re-run.

There are fears of further ethnic clashes if the results are disputed.

According to Guinea insiders, the army has been called in to support the police in maintaining order in the capital, Conakry.

Residents in opposition strongholds say that many people are holed up in their homes and that the police are using live ammunition instead of tear gas against protesters, according to the BBC.

Communications were also cut and the internet shut down.

Police in Tanzania have arrested the chairman of the main opposition party in the wake of its disputed polls.

Freeman Mbowe was detained, along with two other Chadema leaders, for planning violent protests, according to the police.

President John Magufuli was re-elected in a landslide in the October 28 polls, netting 84 per cent of the vote.

The opposition has described the polls as ‘fraudulent’.

‘There were unprecedented levels of fraud and use of force in this election that stole the will of the people to elect the leaders of their choice,’ main opposition candidate Tundu Lissu stated.

The election was marred by the alleged arrests of candidates and protesters, restrictions on agents of political parties in access polling stations, multiple voting, pre-ticking of ballots, and widespread blocking of social media.

Few international observers were allowed to watch the vote.

Tanzania Elections Watch, a group of regional experts, said that the vote ‘marked the most significant backsliding in Tanzania’s democratic credentials.’

It noted a heavy deployment of military and police, whose conduct created a ‘climate of fear’.

Tanks lined the cobbled streets of Stone Town in the semi-autonomous archipelago of Zanzibar – a long-time hotbed of government opposition.

And two opposition parties told the Associated Press that at least 11 citizens were shot dead on the eve of the vote, and more than 100 people were arrested.

The US embassy said there had been ‘credible allegations of significant election-related fraud and intimidation’.

The fear of post-election violence lingers as many Tanzanians watch in dismay.

Lissu, who survived an assassination attempt in 2017 and returned from exile earlier this year, asserted that thousands of observers were turned away from polling stations.

The opposition candidate said his party will not accept the outcome and called on the masses to ‘take the matter in their own hands’ by engaging in peaceful demonstrations.

Some Magufuli critics earlier expressed concerns that if the ruling party would win two-thirds of parliament seats, the president might try to change the constitution to extend the presidency's two-term limit.

Opposition leaders Pascal Affi N'Guessan, 67, and Henri Konan Bédié, 86, boycotted the election, claiming it was illegal for the 78-year-old president to stand for a third term as it broke rules on term limits.

The president's supporters disputed this, citing a constitutional change in 2016, which they say means his first term effectively did not count.

The two key opposition figures urged mass protests to block what they describe as a ‘dictatorship’.

Many fear the disputed election could spark another conflict in the West African state.

There has been a decades-long quarrel between some of the country's leading political figures.

In 2010, Laurent Gbagbo, who was president at the time and was banned from elections this year, together with 39 other candidates, refused to concede to Ouattara following the election that year.

That sparked a bitter civil war that killed more than 3,000 people.

At least 16 people have been killed in this year’s poll.

Riots broke out in August after President Ouattara said he would run again following the sudden death of his preferred successor.

Indigo Côte d'Ivoire, an NGO research group, also claimed that one in five polling stations were closed on election day.