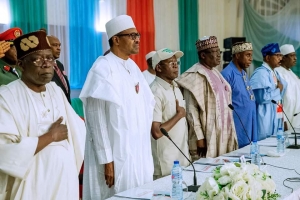 The forthcoming elections in Nigeria is a choice between the integrity of President Muhammadu Buhari and the competence of Atiku Abubakar, the leading contenders in the race. Moffat Ekoriko and Peterclaver Ebochue report

Bola Ahmed Tinubu, one of Nigeria’s most formidable politicians and the leader of the ruling All Progressives Congress set off the race to frame the issues in the country’s forthcoming elections. The country is going to the polls, in February and March, to elect the president, 32 state governors and federal and state legislators. In an allegory on the charcter of the two leading candidates, Tinubu said, “Leave a naira on the table with Buhari in the room, you will find the naira on the table when you return,” He was alluding to the famed integrity of President Muhammadu Buhai who is running for a second term in office, after his feat in defeating an incumbent Nigerian president in 2015. His main contender is Atiku Abubakar, Nigeria’s vice president for eight years (1999 – 2007) and a successful businessman who is running on the ticket of the Peoples Democratic Party (PDP). The party became Nigeria’s main opposition party after losing to Buhari’s APC at the last election.

An anonymous writer on social media latched on to Tinubu’s comment to crack a joke, albeit one which now clearly reframes the election. According to him, ‘If you leave Buhari with N1 in the room, he will pretend not to see it while his aides will steal the money. If you leave it with Tinubu, both the N1 and the table will disappear by the time you return. If you leave it with Atiku, he will multiply the money to N1,000, take 50 per cent and and leave 50 per cent on the table for you.’

In Tinubu’s eyes, Buhari’s integrity is unquestionable, much like that of a colonial banker. To the man who amplified his comment, Atiku’s integrity may be questionable but he has the competence to improve the situation. There is no point bringing Tinubu into the picture since he is not a candidate. The banter is an apt framing of the issues in the election. Nigerians are asked to chose between integrity (as in Buhari) and competence (as in Atiku). Interestingly, none of the top candidates is credited, even by their staunchest supporters, as having both attributes.

Those who have both, are campaigning on the fringes. They are Kingsley Moghalu of the Young Progressive Party (YPP), a an economist, journalist and former deputy governor of the central bank;   Oby Ezekwesili, former Vice President of World Bank, former Minister of education and Co-founder of ‘Bring Back Our Girls’, BBOG, Movement who is running on the platform of the Allied Congress Party of Nigeria (ACPN);  and Adesina Ayodele Fagbenro-Byron, a former governance adviser with the United Kingdom's Department for International Development, a lawyer and musician running on Kowa Party platform. As at the last count, the Indpendent National Electoral Commission (INEC) has registered 91 political parties though only 46 parties fielded candidates for the presidential race. Of this number, a handful of the parties are said to be serious while the rest are believed to have gone into the race just for the records or probably to test the ‘waters’. According to reports, most of the newly registered political parties do not have the grassroot support and structures across the 36 states of the country.

Part of the campaign strategy of the APC is to continue to paint PDP as the party of corruption. The party has not wasted time since it took over power in May 2015 to blame Nigeria’s woes, be it economic or security, on the corruption which it claims PDP foisted on the country. In fact, its campaigners in 2015 had asked Nigerians to vote in Buhari so that he ‘will kill corruption before corruption kills Nigeria’. More than three years on, the party is still anchoring its legitimacy in power on the anti corruption mantra.

APC is quick to reel out its achievements on the anti corruption front. The Economic and Financial Crimes Commission, the government anti corruption agency, recovered N473.06 billion ($1.3 billion) as proceeds of corruption and other economic crimes in 2017, the last year for which data are available. Many Nigerians still believe that Buhari is the man to fight corruption, despite attempts by the opposition to puncture his integrity persona. The challenge the opposition faces is that despite being a public officer since the age of 19 (bar the 30 years he was out of power), Buhari has no oil bloc or business that can be traced to his name.

The opposition has moved to demystify the president’s persona. They have pointed out and correctly too, that the president is surrounded by known corrupt persons, and officials of his government caught with their hands in the oily Nigerian pot have been let off with slaps on the wrist. Immediately  he inaugurated his presidential campaign council, the PDP quickly asked him to send the list of members to the EFCC for vetting if he means business. The most damaging counter attack appears to be that of petroleum subsidy. When the president was campaigning for office in 2015, he accused his predecessor of fraud in subsiding 30 million litres of petrol a day when the assessed consumption was 20 million litres. Bukola Saraki, the president of Nigeria’s Senate and now the director general of Atiku’s campaign council says Buhari’s government is subsiding 50 million litres a day. Worse, the funds for the subsidy was never appropriated by the National Assembly. As at May, the government was spending $7 million daily to subsidise fuel imports. The Nigerian National Petroleum Company (NNPC), the state oil company, which is the sole importer of the product calls the subsidy ‘under recoveries’, the difference between the cost of the fuel it imports and the pump price of the product. The subsidy tells part of the story. For an oil producing country, Nigeria still runs a high fuel import bill, which was $2.7 billion by the first half of 2018.

The ruling APC has latched on to the perception of corruption against Abubakar. His former boss, Olusegun Obasanjo, who later endorsed his candidature had literally written off the candidate as a man unfit to hold public office. To Atiku’s handlers, the message has shifted to his competence and the promise to turn round an economy which has depreciated on all known indices. The attempt to play up the integrity plus competence reputation of his running mate, Peter Obi, an economist and businessman, has not gained traction. Reason: Buhari’s running mate, Yemi Osibanjo, a professor of law and the current vice president, is also perceived as honest and competent: rare attributes for  a Nigerian politician.

The opposition wants President Buhari to run on the basis of his performance in office, which has been rather poor. On security, the president has not delivered as promised. Boko Haram insurgents have become bolder in recent weeks taking over towns like Baga, close to the shores of Lake Chad. His biggest security challenge has been killer herdsmen, recognised globally as the world’s fourth deadliest terrorist group. The president has not been able to reign in the herdsmen, sparking accusations that at best, he is a passive supporter of their actions. Last year, the international Society for Civil Liberties and rule of Law, an NGO, counted 1,750 people, mainly Christians, killed by the herdsmen, in the first half of 2018. The group, said the death count from the activities of herdsmen and Boko Haram, from June 2015 when the government came into to power to mid 2018 stood at 8,800.

On the socio-economic index, Nigeria has overtaken India as the country with the highest number of poor people. Given that Nigeria’s population is one seventh of India’s, it is an appaling performance. The national currency has depreciated by 50 per cent and the country’s statistican says the number of unemployed Nigerians increased by 3.3 million to 20.9 million in the third quarter of 2018.

President Buhari has hit back with his government’s achievements. Top of the list is the transformation in agriculture, which has seen the country achieving near sufficieny in food production. Godwin Emefiele, the central bank governor says the country’s monthly food import bill has fallen from $665.4 million in January 2015, four months before the new government came into power, to $160.4 million by October last year. According to him, the cumulative savings over the period came to $21 billion. The government has also invested heavily on infrastructure, putting in a record $9 billion in the last two years.

With INEC, Nigeria’s electoral umpire scheduling the presidential election for the 16th of February, 2019, there are fears about the credibility of the exercise. PDP is worried that the security agencies will not be impartial in the policing of the elections. The heads, bar two,  of all security agencies in Nigeria are from the president’s inner circle. President Buhari succeeded in ignoring the spirit of federal character in the constitution to appoint security chiefs only from his part of the country. Uche Secondus, national chairman of PDP in reviewing the performance of the party in an election in Ekiti State last year said ‘they contested against APC and the security agencies’. NewsAfrica learnt the party still harbours that fear.

Few weeks ago, Amina Zakari, President Buhari’s niece by marriage was appointed the head of the collation centre at the electoral commission. This is being seen as part of the plot to rig the election in favour of the government. The attempt to remove the country’s highest judge, Walter Onnoghen, in breach of laid down constitutional rules is perceived as another. The government filed charges against the chief judge at the Code of Conduct Tribunal on January 11 with a summons to appear in court on Monday. The government is accusing the chief judge of failing to declare his assets in line with public service rules. To the shock of many, the government also filed a motion asking the chief judge to step down from office. Under Nigerian laws, any allegation against a judicial officer has to be reported to the National Judicial commission which is vested with the power of investigation and discipline of judges. This was not done in this case. In fact the timeline from the receipt of a petition against the chief judge to filing of charges was 48 hours, an unpredecented record in Nigeria’s law enforcement history. The move against the chief judge has attracted condemnation from politicians, civil society and lawyers.

President Buhari has also refused to sign the amended electoral bill which could have institutionalized the deployment of card reader technology. Proponents of the bill says it will check malpractices like bloated votes as the capturing of accredited voters will be transmitted in real time to a central computer. On his part, the president in refusing to sign the bill into law says it will create confusion, coming so close to the actual elections. He has, however, promised to deliver a credible and fair election.